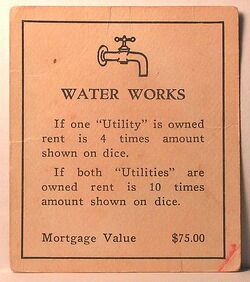 Water Works is the second of the two Utilities and has the exact same statistics as Electric Company, the only difference being position. It is situated between Ventnor Avenue and Marvin Gardens. As a Utility, it has a unique rent collection system which is based off the amount rolled on the dice rather than the number of Houses or Hotels.

Just like Electric Company, Water Works is not meant to bankrupt players. With a measly top rent of $120 ($48 if one Utility is owned), there is little to no chance that this space will pose a threat during gameplay. However, Water Works can provide a steady source of income and pays for itself quickly. It is worth buying as a casual space that may generate income or as leverage for trading, but it should not be used to try and take large amounts of money from other players.

In the Mega version, there is an extra Utility called the Gas Company. When paired with Electric Company and Water Works, the owner can earn far more when a player lands on a Utility, with the highest possible rent now at $240, just $10 less than Mediterranean Avenue with a Hotel. If you are playing this version, try to get all three Utilities and enjoy the extra revenue.