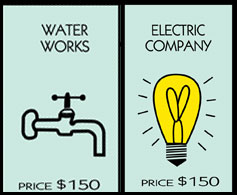 The Utility properties, like Railroads, cannot be developed by the addition of Houses or Hotels and have incremental value based on the number of utilities controlled by the same player.

Utilities are the only properties without fixed rents, as rent depends on the dice roll which landed the token on the property.

Mary's token is on Reading Railroad; on her turn, she rolls the dice and they come up with 7. Counting the spaces, she lands her token on Electric Company, which is owned by Sarah. The dice roll (7) is multiplied by 4, for a total of 28; Mary now owes Sarah $28 rent.

In the Standard Editions (US & UK), the two utilities are:

The Mega Edition has an additional utility called Gas Company. If 3 Utilities are owned the rent is 20 times the dice value.

In the Major League Baseball Collector's Edition (1999), the standard utilities have been replaced by two broadcast partners:

In The. com Edition (2000), the standard utilities have been replaced by two operating systems:

In the Here and Now Edition (2006) and the Boutique Edition (2007), the standard utilities have been replaced by two "Service Providers"

In the Here & Now: The World Edition (2008), the standard utilities were changed to:

In My Little Pony Edition:

In addition to the three utilities, Monopoly Revolution has an additional utility called Communications Company.