Monopoly Wiki
Register
Don't have an account?
Sign In
Advertisement
in: Monopoly, Monopoly Editions, Board Game Variants,
and 5 more

The Ultimate 007 James Bond Collector's Edition is a customizable version of Monopoly published in 2006 by USAopoly. It features stickers from all 007 films up to Quantum of Solace in order to customize the board, in the same manner as the My Monopoly series of editions.

NOTE: There is also the regular (non-customizable) Collector's Edition by the same publisher in the same year.

"In this customizable edition of the Monopoly game, released in 2008, YOU send Bond on assignment. Set up your game board and buy, sell and trade over 50 exotic locations, bases, and properties from the world of James Bond. All 22 Bond films are represented including Quantum of Solace. Which location will you place on Boardwalk: Casino Royale or Crab Key? You decide. With over one million possible combinations of locations, you’ll never play the same game twice. Use your decoder gadget to decipher the directives on the Bond Allies and Enemies cards. The Ultimate James Bond Edition comes complete with 6 collectible pewter tokens featuring the Moonraker Shuttle, Octopus, Casino Royale Poker Chip, Zorin’s Airship, Q Boat and Moon Buggy." 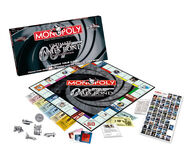