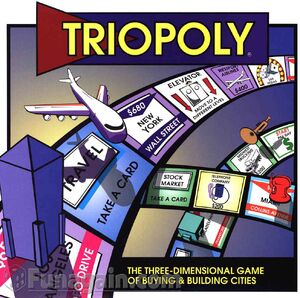 Triopoly is a board game designed by Jeffrey W. Berndt, Chris Hornbaker and Jeremy Parish, first published in 1997 by Reveal Entertainment, Inc.  It is a property trading game in the tradition of Monopoly, Finance (board game), Easy Money, and The Landlord's Game.  The unique aspect of Triopoly is that instead of just one "two-dimensional" board, there are actually three boards which stack on top of one another.

"Triopoly, the Three-Dimensional Game of Buying and Building CitiesThree Levels of Strategy!  Three Ways to Play!  Three Times the Excitement! Add exciting new dimensions, discover innovative game-playing strategies and build a fortune as you move across three different levels.  Buy, sell, and trade properties from 15 American cities as you negotiate your way to a three-tiered victory! Three board levels means three times the player strategy.  Multiply that by three unique playing variations, and it's like a different game every time you play! Build skyscrapers, shopping malls, and gas stations from New York City to Los Angeles as you become a commericial real estate tycoon.  Develop money-management and entrepreneurial skills on your way to creating a financial empire! Three Ways to Play:  Quick, Standard, and Deluxe."

The object of the game is to become the wealthiest player through the puchase and development of city properties located on various streets, avenues, and thorougfares in major metropolitan areas in the United States.

The use of three game boards is more than just a way to distinguish Triopoly from Monopoly, it actually allows players to choose how long/complex of a game they want to play.  A Quick Game can be played using just the largest board, a Standard Game adds the second board, and the Deluxe Game adds the third and final board.  Each board has properties which are color matched to the properties on the other boards.  This means color sets (monopolies) are vertical instead of horizontal.  The sets span all the boards used for that level of play.

There have been at least 4 versions of Triopoly produced over the years: