Monopoly Wiki
Register
Don't have an account?
Sign In
Advertisement
in: 1904 Editions, 1924 Editions, Board Game Variants,
and 2 more 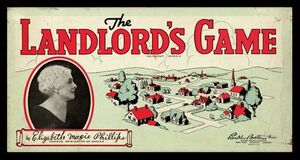 The Landlord's Game is a board game patented in 1904 by Elizabeth Magie. It is a realty and taxation game, which is considered to be a direct inspiration for the board game Monopoly. Though many similar home-made games were played at the beginning of the 20th century and some predate The Landlord's Game, it is the first of its kind to have an attested patent.

Magie designed the game to be "a practical demonstration of the present system of land grabbing with all its usual outcomes and consequences". She based the game on the economic principles of Georgism, a system proposed by Henry George, with the object of demonstrating how rents enrich property owners and impoverish tenants. She knew that some people could find it hard to understand why this happened and what might be done about it, and she thought that if Georgist ideas were put into the concrete form of a game, they might be easier to demonstrate. Magie also hoped that when played by children the game would provoke their natural suspicion of unfairness, and that they might carry this awareness into adulthood.

Although The Landlord's Game was patented, it was not taken up by a manufacturer until 1910, when it was published in the U.S. by the Economic Game Company of New York. In the United Kingdom it was first published in 1913 by the Newbie Game Company of London under the title Brer Fox an' Brer Rabbit, although despite the title change it was recognizably the same game.

Magie moved back to her birth state of Illinois and was married in 1910, then moved with her husband to the Washington D.C area and eventually patented a new version of The Landlord's Game in 1924 under her married name of Elizabeth Magie Phillips. This version, unlike the one depicted in her first patent, included named streets, some named after locations in Chicago. Apart from commercial distribution in 1932, it spread by word of mouth and was played in slightly variant homemade versions over the years by Quakers, Georgists, university students, and others who became aware of it. The 1932 commercial version also featured rules for an alternate game called Prosperity.

In 1939 Parker Brothers published a reproduction.

Magie held the patent until 1935, when she sold it to Parker Brothers for $500. The company had recently started distributing Monopoly, which it purchased from Charles Darrow who claimed to have invented it. It was later proven that Darrow did not invent Monopoly and Parker Brothers doubted his story immediately after buying it from him. Parker Brothers was buying up the patents of various commercial forms of the game in order to claim undisputed rights to selling it. As part of the purchase agreement, which Magie insisted upon, Parker Brothers manufactured and marketed three of her games; while Bargain Day and King's Men (1937) did relatively well, a third edition of The Landlord's Game (1939) only sold a few hundred copies before it was discontinued.

In a 2004 episode of PBS' History Detectives (title: Monopoly; Japanese Internment Camp Artwork; The Lewis and Clark Cane), the show investigated a game board belonging to a Delaware man, having an intermediate version of a game combining elements of The Landlord's Game and Monopoly. The investigators concluded that this game board was the missing link that proves that Monopoly was derived from The Landlord's Game. 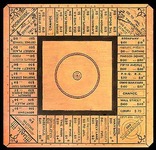 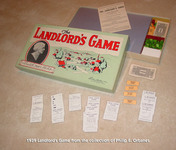 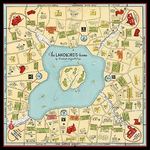 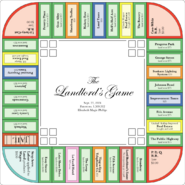 Modern version of the game board based on the 1924 patent
Community content is available under CC-BY-SA unless otherwise noted.
Advertisement