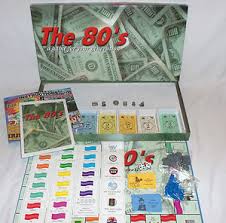 The 80's: "A game for your generation" is a Monopoly-based "opoly" variant on the classic game published in 2000 by Late for the Sky and centered around the people, places and things of the decade of the 1980's.

"In "Late for the Sky" fashion, this game is designed similarly out of the Monopoly/Landlords foundation with a few twists and set to an '80s' theme. Instead of purchasing properties, you're going after themes. Places like "Park Place" and "Baltic Avenue" are replaced by ones like "Greed" and "Me Too". The corner spaces are different as well. Some house rules common to many monopoly tables are present in this rulebook, as money from different fines and fees from the game wind up in the middle until someone lands on a lucky space. The player pieces are thematic metal figurines (PAC-Man, Computer, Breakdancer, etc.) Late for the Sky also made similar molds for "The 90's" "The 70's" and "The 60's", and perhaps other decades as well."

Retrieved from "https://monopoly.fandom.com/wiki/The_80%27s?oldid=14497"
Community content is available under CC-BY-SA unless otherwise noted.