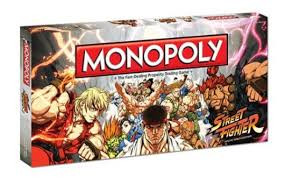 Monopoly: Street Fighter Collector's Edition is a version of the classic boardgame published by USAopoly in 2012 and featuring the Street Fighter franchise.

"Enter the world of one of the best selling video game franchises of all time in this special Street Fighter Collector’s Edition of Monopoly. Buy, sell and trade fighting arenas associated with the most iconic characters over 25 years such as Makoto in the Karate Dojo, Ryu on the Rooftops of Japan and Major Bison in the Shadaloo Headquarters."

"While custom art and clever SF shout-outs are indeed a welcome addition, the best part about this customized version is the final 6 collectible Street Fighter-themed tokens, which were voted by fans. : Ryu, Major Bison, Blanka, Hadoken, Chun-Li’s Wrist Cuff and Vega’s Mask." 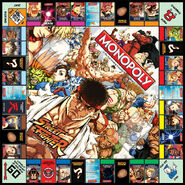 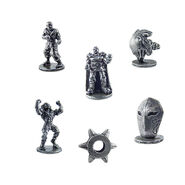 Tokens
Add a photo to this gallery
Retrieved from "https://monopoly.fandom.com/wiki/Street_Fighter_Collector%27s_Edition?oldid=12305"
Community content is available under CC-BY-SA unless otherwise noted.