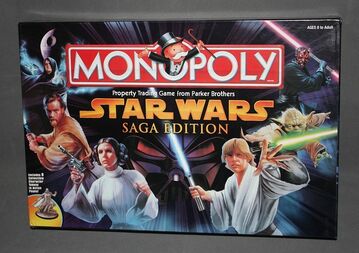 Monopoly: Star Wars Saga Edition is a Licensed Star Wars inspired version of the classic boardgame published by Hasbro in 2005.

Properties, tokens, and Chance ("Sith")/Community Chest ("Jedi") cards all include elements from the six feature films of the franchise: Episodes I through VI, while Houses are "Settlements" and Hotels are "Cities".

If a player rolls doubles he or she can choose to "use the force" instead of rolling again, based on the following table:

If a player chooses to try and claim another's property (by having rolled "boxcars" (double sixes), each player rolls one die: one is red and one is blue. 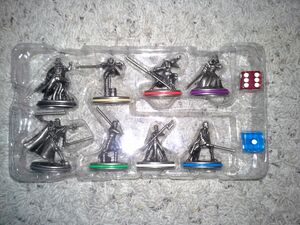 The set includes four light side and four dark side tokens representing characters from each of the six movies; the light side contains Luke Skywalker (Episode IV: A New Hope), Leia Organa (Episode VI: Return of the Jedi), Obi-Wan Kenobi (Episode III: Revenge of the Sith), and Master Yoda (Episode II: Attack of the Clones). The dark side contains General Grievous (Episode III: Revenge of the Sith), Emperor Palpatine (Episode VI: Return of the Jedi), Darth Maul (Episode I: The Phantom Menace), and Darth Vader (Episode V: The Empire Strikes Back).