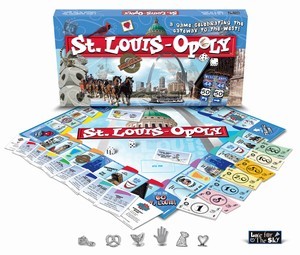 St. Louis-opoly is a Late for the Sky game centered in the city of St. Louis, Missouri, USA.

It was originally published in 1998 as St. Louis in-a-box. Several editions have been published, including a version under the name "St Louis Opoly" (with no period after the St and no dash before the opoly).

"A board game about the GREAT city of St. Louis!"

"We chose some favorite landmarks and traditions, mixed in some Clydesdales, custard, bridges, riverboats, a great big arch, and some BIG FUN..." 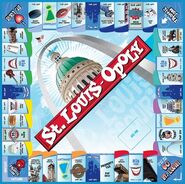 Different box art for the "St. Louis in-a-box" game, same board included as the 1998 version 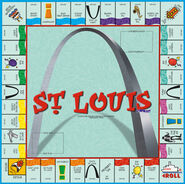 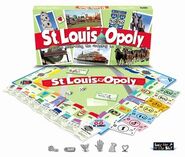 Retrieved from "https://monopoly.fandom.com/wiki/St._Louis-opoly?oldid=13369"
Community content is available under CC-BY-SA unless otherwise noted.