Monopoly Wiki
Register
Don't have an account?
Sign In
Advertisement
in: Monopoly, Board Game Variants, Monopoly Editions,
and 4 more 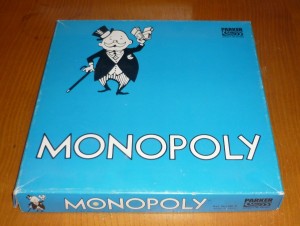 The Monopoly: "Spanish Square Edition" is an edition first released in 1961 by Juguetes Borrás-Mataró under license by Parker Brothers, using the UK Waddingtons version as a model and the streets of Madrid (red box) or Barcelona (blue box) for spaces.

These editions were last published in 1993.

It should be noted that the game's title is simply "Monopoly". "Spanish square edition" is simply an unofficial descriptor given by collectors.