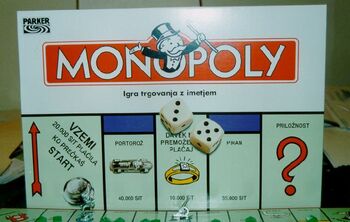 Yugoslavian Monopoly (*Slovenia was part of Yugoslavia from 1945-1991) begins in 1970 with release of first Yugoslavian version of the game with places all around the country, cards and other language related stuff translated into Serbo-Croatian language, as currency it used Yugoslav dinar etc. Some people remember it from their childhood:

At the later date came out a different version of Yugoslavian Monopoly, which included places mostly at location is today's Slovenia. Everything was translated into Slovene language and like previous version it used Yugoslav dinars as currency. In Slovenia at was more popular than original Yugoslavian version.

At that point in time some other versions of Yugoslav Monopoly were released as well, including Macedonian version.

Slovenia became independent in 1991 and was no longer part of Yugoslavia. About 2 years later we also got our official version of Original Monopoly. All the cards and related stuff was in Slovene language, properties which were included were only places from Slovenia, also their layout has been changed from the last version. Airports which were used instead of train stations in previous versions were raplaced with the train stations. This version of Monopoly was the first edition which used Slovene tolar as its currency. Banknotes were adjusted to the currency, meaning $500 bill was replaced with 50.000 SIT one, $100 was replaced with 10.000 SIT, $50 with the 5.000 SIT, $20 with the 2.000 SIT, $10 with 1.000 SIT, $5 with 500 SIT and $1 was replaced with 100 SIT one.

At 1st of January 2007 Slovenia changed its currency from Slovene tolar to Euro, meaning new version of Monopoly has to come out. It had some minor fixes, plots remained the same, but currency was changed. Banknotes from 50.000 SIT to 100 SIT were replaced with €500 to €1 ones. This version is currently official international version, although many people rather buy Original US or UK version instead of Slovene one, which means less products are sold comparing to  Slovenian edition of Yugoslavian Monopoly (described in the second paragraph), because at that stage of time Original UK an US versions were unavailable to most population of Slovenia.

Locations and Board Layout

Slovene version of Monopoly uses places and locations all around the country instead of Streets/Avenues as they are used in original UK and US editions.

Locations and properties on the board

Those themes represent topics with which Slovenia is famous in the world such as: beautiful seaside, camps, hills and valleys, nature, castles/traditions, skiing/sports, bathing tourism, lakes...

Prices of plots and their taxes are the same as prices of matching plots in US standard edition.

On the board there are 4 Train Stations which have been determined on their importance. The first station you hit from Start is Železniška postaja Jesenice/Train station of Jesenice, which is important because all the train transport from Balkan/South Europe goes to Central, West and North Europe through that Station. Next station that comes along is Glavni kolodvor (transl. The main railway station) which is located in Ljubljana, the capital city of Slovenia. Station is important because of its location in the capital city. This station is followed by Železniška postaja Zidani Most/Train station of Zidani Most which is an important intersaction of three railroads: one from the seaside (Trst, Koper), one from the South (Zagreb, Belgrade) and one from the North (Maribor, Vienna). The last station is Železniška postaja Koper/Train station of Koper, which is the middle point between train and sea transport.

Javna razsvetljava and Mestni vodovod (transl. Public Illumination and City waterworks) are the replacements for Electric Company and Water Works.

Other editions translated into Slovene

There are many other editions which have been translated into Slovene language. They are listed and described here, but as each gets its own page, only the title will remain here.

Monopoly Junior: Zabava is Slovene version of Monopoly Junior: Party. It uses same slots and cash as original. Only difference is translated names, rules and texts into Slovene language.

Monopoly: Tukaj in zdaj: Svetovna izdaja is Slovene version of Monopoly: Here & Now: The World Edition Monopoly game. It includes the same cities as original, except their names are translated. Money is adjusted to Euros and rules and card are translated to Slovene.

Monopoly: Kdo je najbogatejši? is Slovene version of Monopoly: Who's the richest? Edition. the version includes European countries such as Italy, Poland, Ireland, Great Britain... but it also includes Slovenia with cities Ljubljana, Maribor and Koper (Italian: Capodistria) which are located at the spots of Atlantic Avenue, Ventnor Avenue and Marvin Gardens. At the place of Water works Slovenia has also its spot for World famous attraction which is Postojnska jama (Eng. Postojna cave, Italian: Grotte di Postumia, German: Postojna Hohle). Rules and cards are translated to Slovene language as well and currency is adjusted to Euros.

Monopoly: Elektronsko bančništvo is a Slovene version of Monopoly: Electronic Banking. Game itself is the same with Slovene translations and adjusted Electronic cards.

Retrieved from "https://monopoly.fandom.com/wiki/Slovene_Edition?oldid=15894"
Community content is available under CC-BY-SA unless otherwise noted.