Monopoly Wiki
Register
Don't have an account?
Sign In
Advertisement
in: Monopoly, Monopoly Editions, Board Game Variants,
and 4 more

MONOPOLY®: Scott The Woz Edition is a licenced board based off the Scott The Woz web series, made in collaboration with Hasbro, USAopoly, and the Pixel Empire.

MONOPOLY®: Scott The Woz Edition was released on November 26th, 2021 and officially announced the same day on the Scott The Woz YouTube channel. 60% of the MSRP was stated to go to the charites Critical Care Comics and Children's Miracle Network. Only 5,000 copies of the board were avalible, the board sold out within 5 hours of being up on the website Pixel Empire.

Hey all, Scott here! Evade taxes like never before with the Scott The Woz edition of the classic board game MONOPOLY®! Buy, sell and trade iconic locations from the series such as The Shaft Family Estate, The Litigation Station, and Stale Pretzels while using custom tokens of items on Scott’s desk! “Liquidate the company” and go for broke in MONOPOLY®: Scott The Woz Edition!

Unique Properties with the Episode Origin and Price

*Note: "V-Cards" are a reference to the Episode "Viral Games" and all of the tokens are items found on Scott's desk throughout the series 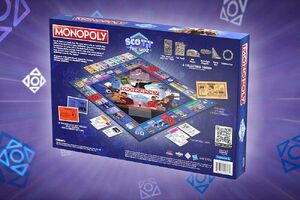 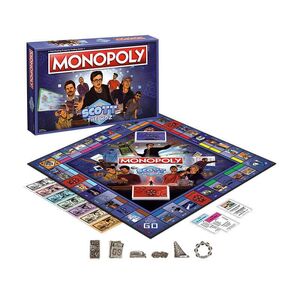 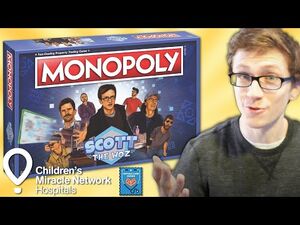