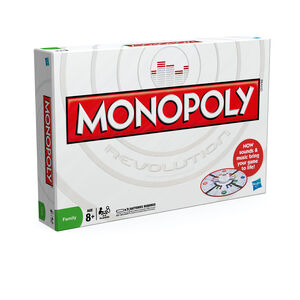 Monopoly: Revolution is a special edition released in 2010 by Hasbro to celebrate the 75th anniversary of Monopoly. It features electronic banking and sounds.

In essence, it is Monopoly with a circular board. No paper money is used, instead it uses a credit card setup with an electronic device that also substitutes chance cards and produces sound effects and music according to the events of the game.

Set
Add a photo to this gallery
Retrieved from "https://monopoly.fandom.com/wiki/Revolution_Edition?oldid=13822"
Community content is available under CC-BY-SA unless otherwise noted.