Pirates of the Caribbean Collector's Edition

Pirates of the Caribbean

:A pirate adventure awaits you in this special Pirates of the Caribbean collector’s edition of the monopoly game featuring pirate destinations from the new movie, On Stranger Tides. Do you have what it takes to outwit and outlast the legendary Pirates of the Caribbean as you buy, sell and trade prominent movie locations including Blackbeard’s Cabin, WhiteCap Bay, St. James Palace and the deadly Mermaid Pools? The fate of the high seas lies in your hands as you battle for ultimate control of the Fountain of Youth." 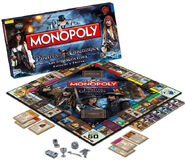 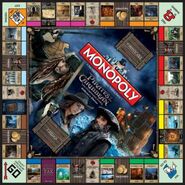 Tokens
Add a photo to this gallery
Retrieved from "https://monopoly.fandom.com/wiki/Pirates_of_the_Caribbean_On_Stranger_Tides_Collector%27s_Edition?oldid=13419"
Community content is available under CC-BY-SA unless otherwise noted.