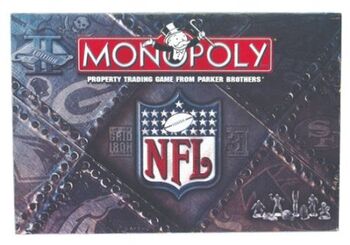 This version of the classic boargame plays just like the normal version of Monopoly (with the exception of using a coin toss to determine who goes first). All of the properties, prices and cards are the same, just named after teams, or football-themed. Chance and Community Chest are AFC and NFC. The railroads are replaced by two teams each and the rest of the properties are one team each. The utilities become TV and Radio.

The two Super Bowl teams from 1999 (Broncos as Boardwalk and Falcons as Park Place) are set as the most expensive, with the rest of the teams just filling out the rest of the properties around the board (including railroads) in the order of their record for the 1998 season.

There are bleachers and stadiums for houses and hotels, and the playing pieces are all football themed, with football shaped dice rounding out the game.

Retrieved from "https://monopoly.fandom.com/wiki/NFL_Gridiron_Limited_Edition_(1999)?oldid=14991"
Community content is available under CC-BY-SA unless otherwise noted.