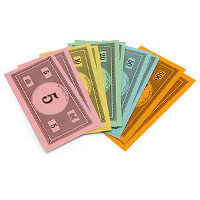 This article is about the concept and use of money in the game rules. For information on the actual medium of exchange, see: Monopoly Dollar

Monopoly Money (or Munny) is what players use to buy properties, construct buildings, and pay rents, fines, or taxes.

Properties can be Mortgaged in order to borrow money from The Bank.

The distribution of cash in the U.S. version has changed with the newer release versions. Older versions had a total of $15,140 in the following amounts/colors:

The newer (Sept. 2008) editions have a total of $20,580, with 30 of each bill denomination. In addition, the colors of some of the bills have been changed; $10 notes are now blue instead of yellow, $20 notes are a brighter color green than before, $50 notes are now purple instead of blue, and $500 note are more are a darker orange the before.

Since then, the US version has taken on the British version's initial cash distributions of:

The colors in each version vary. New versions may have the following colors: