Monopoly Wiki
Register
Don't have an account?
Sign In
Advertisement
in: Monopoly Editions, Millionaire, Board Game Variants,
and 5 more 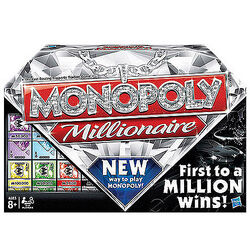 Monopoly Millionaire is a gameplay variant of Monopoly. The board is different, as is the goal, and there are other variations.

The Board lacks railroads, utilities, and tax spaces and therefore only has 8 spaces per side (2 less than the standard 10-sided Monopoly Board), and in place of "Community Chest" spaces there are "Millionaire Lifestyles" spaces (which serve a similar purpose).

Another change is the inclusion of Fortune Cards which are placed on all 22 of the property spaces before game play begins.  These cards are similar to Chance and Community Chest cards, but have their own consequences.  Some move the player around the board, some cost the player money, some give the player money, and some can be used to force trades with other players (or deny those forced trades).

Also the properties' title deeds are different, but they have 3 properties per monopoly and 2 properties for the brown and dark blue properties.

What's in the box

The only four tokens are boat, plane, motorcycle, and car are used in the game. This makes it only playable for 4 people. However, the movers can evolve which effects the game. For example: A Basic token (the first token) collects the least money, but pays the least money to the bank if charged by the bank. You start off with a basic token (Scooter, Canoe, Go Kart, Airplane). If you want to upgrade to a regular token (second stage) (Plane, Mini car, Yacht) you must pass or land on GO and take a $50,000 cut of the passing salary. Then you can upgrade to a Deluxe token (third stage) (Jet, Ship, Motorcycle, SUV).