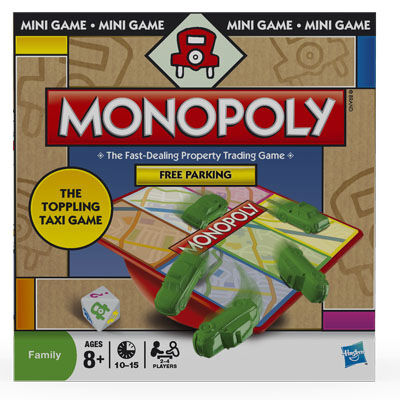 Monopoly Free Parking: The Toppling Taxi Game is a "Mini-Game" released by Hasbro in 2009 that can be used as a stand-alone game or as an addition to a "standard" Monopoly Board.

"20 taxis are divided equally among players. In turn, each player rolls the die and either places one of their taxis on the indicated color (or any color if the "?" is rolled) or takes a taxi from each of the other players (if the police officer is rolled). First player to get rid of all their taxis wins."

"This game can be played as a stand-alone game or can be used in conjunction with any monopoly game. Special rules for playing with classic Monopoly are included."

If the die result is a Car, play one of the five Cars to the Monopoly Free Parking playing area in the same zone that matches the die color. Wait until the game board stops wobbling. If the Car remains, roll again. If the Car falls of, the player’s turn is over.

If the die results in a Question Mark, the player balances one of their Cars in any space. Again, wait for the game board to stop wobbling. If the Car remains, roll again. Otherwise, the player’s turn is over.

If the die results in the Police Officer, the player’s turn is over.

If the player gets all five cars to remain on the game board, they are awarded a free Taxi ride to any location on the board immediately. Once they arrive, they can take any actions as they would normally. Otherwise, the players turn is over without further penalty or action.