This article is about the actual medium of exchange. For information on the a concept and use of money in the game rules , see: Monopoly Money

Monopoly Dollar, (represented by the currency sign 'M'[1]) shortened to "Dollar", is the main currency used in Monopoly. At the beginning of a game, each player gets 1,500 dollars, but his or her total changes almost every turn. Dollars can be used in any transaction, including buying a lot, buying a house, getting out of jail, paying rent, and making a trade. Dollars are added to the game when collecting Salary at Go, mortgaging Houses or property, or on some Chance and Community Chest cards. Dollars are taken away from the game when buying property and houses, unmortgaging, being taxed, getting out of Jail for 50 dollars, and finishing a game.

In a standard set, money is as follows:

Other Forms of Money

Besides the purely electronic money in Electronic Banking Editions, in the late 1930's, metal coins were sold by Parker Brothers in the traditional denominations (1,5,10,20,50,100,500) under the brand name "Monopoly Metal Money".

Many of the newer non-standard editions have unique versions of the notes; commonly in the standard colors and denominations but featuring Edition-appropriate artwork.

The "One Munny" Note

The One Hundred Note 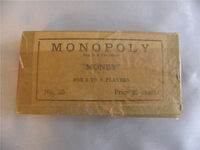 Sealed pack of replacement Monopoly Money from the 1930's 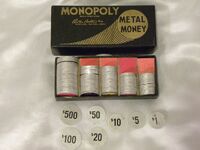