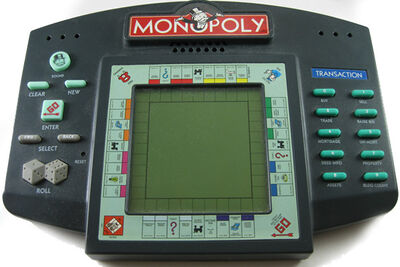 Monopoly: Electronic Hand-Held Game is a battery-operated handheld computerized version of the classic board game, released by Hasbro in 1997.

This electronic unit plays by the written rules of Monopoly. There's about a thousand different house rules people use when playing Monopoly (e.g. putting money under Free Parking), and few if any of them add anything to the game. Most people will first be confused playing the game by the rules, but when they do they will be pleasantly surprised at how much fun the game becomes when they strip away the nonsense 'house rules' some uncle added in boredom.

The game's sound options are full volume, half volume, and no sound. The sounds include 'Rich Uncle PennyBags' narrating and reading the Chance and Community Chest cards drawn by players, the individual computer players with their different accents, and sound effects for the Railroads, Water Works, Electricity Works, and 'Go to Jail' spaces.

A very nice feature is the unit goes to sleep after five minutes of non-use, but will remember exactly where the game was when you wake it up next, so you can leave the game to pause and take up again as your own schedule allows. You actually have to hold down the 'new' button for several seconds while the unit is on to erase the current game.

Having all the math and banking taken care of by the computer speeds the game enormously. Gone are the arguments over the most disputed cards in the game, 'Street Repairs' and 'Maintenance Fees' put into the decks to knock down players with many houses and hotels, as well as 'Advance to Utility', 'Advance to nearest RR and pay twice the normal amount', and 'Elected Chairman. Pay each player $50'. The computer resolves all 16 cards in each deck correctly, by the rules.

Trading is also fully supported--better than in most PC versions of the game! You can propose swapping any combination of properties, cash, and 'Get out of Jail Free' cards with the computer opponents and see if theyll accept, and the better AI players will propose trades to you as well. If youre trying to complete a color set, generally you will have to bid $37 + the three house rent value of the property to get them to accept it, but when they get to complete a color set of their own as well, they will go lower. The trade interface takes a while to get the hang of. After you choose Property, you use the backward and forward buttons to move the flasher around the different properties belonging to you and the opponent youve chosen. Press GO on each property you want to enter into the trade, press the trade button when youve chosen all properties and want to exit back one level. Youll now see the properties youve chosen for the trade. If these are wrong go back into Properties again and toggle them on or off. Finally, add some cash. (Pay means you give to the computer, Collect means you take from the computer), and its all as you like, propose it. Theyll either accept or reject it. As the instruction says, making good trades is central to the game. With experience youll see three way trades that are win-win for all involved. Use them.

The interface to read the deed card info for each property could have been improved but is adequate. The asset function is a great addition. Housing shortages are supported and can be a strategy. Auctions of unwanted properties by land-rich and cash-poor players add a forgotten angle to the game.

The only fault would be in the stupider computer AIs strategy of always buying every house they can afford and not keeping adequate cash reserves. They will end up selling their properties back to the bank at half value over and over again. Usually its a battle between me and the smart AIs to see who they bankrupt to and give their property.

Buying this game has been a discovery for me. I could never get through a game of Monopoly before, it would drag on to no purpose. But when you play by the rules as with this unit, you find out what all the original fuss was about that spread this game across the nation. I would recommend this game even to Monopoly haters. When you finally play the game by its true rules you'll find the gem still glows underneath all the detritus and tarnish people have unnecessarily added over the years.

Retrieved from "https://monopoly.fandom.com/wiki/Monopoly:_Hand-Held_Electronic_Game?oldid=18148"
Community content is available under CC-BY-SA unless otherwise noted.