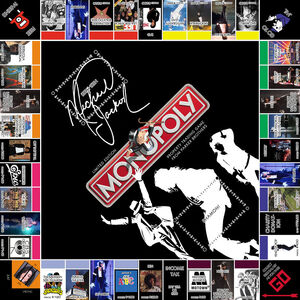 Monopoly: Michael Jackson Edition is a custom-made unofficial edition of the classic boardgame created as a tribute to The King of Pop (1958-2009) by DeviantArt user LordDavid04.

Purchase some of the iconic moments of Michael Jackson's career, spanning from his time as part of The Jackson 5, to the creation of the Thriller music video, to his HIStory tour and more. Build Recording Studios and Concerts as you become the wealthiest Michael Jackson fan.

Retrieved from "https://monopoly.fandom.com/wiki/Michael_Jackson_Edition?oldid=15300"
Community content is available under CC-BY-SA unless otherwise noted.