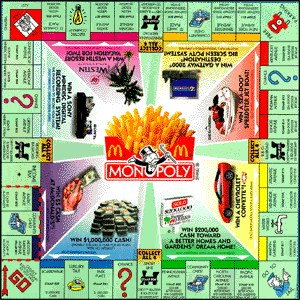 The McDonald's Monopoly game is a sweepstakes advertising promotion of McDonald's and Hasbro, which uses the theme of the latter's board game Monopoly. The promotion has been offered in the United States, New Zealand, Canada, Germany, Hong Kong, United Kingdom, France, Portugal, Spain, the Netherlands, Australia, Singapore, Austria, Poland, and Switzerland since 1987. Brazil and Argentina were added in 2013. Since 2003, Best Buy has been involved in the U.S. version, and later in the Canadian version. The promotion has used other names, such as Monopoly Best Chance Game (2003–2005, the beginning of Best Buy's involvement), Monopoly: Pick Your Prize! (2001) and Monopoly/Millionaire Game, a version based on the Who Wants to Be a Millionaire TV show. In 2016, the game was renamed as Money Monopoly.

Like many merchants, McDonald's offered sweepstakes to draw customers into its restaurants. Laws generally forbid a company from administering its own contests, in order to prevent fraud and to ensure that all prizes are given away. McDonald's had a relationship with Simon Worldwide Inc., which was responsible for the distribution of the contest pieces and the awarding of major prizes.

In 2000, the US promotion was halted after fraud was uncovered. A subcontracting company called Simon Marketing (a then-subsidiary of Cyrk), which had been hired by McDonald's to organize and promote the game, failed to recognize a flaw in its procedures; Chief of security Jerome P. Jacobson was able to remove the most valuable game pieces, which he then passed to associates who would redeem them and share the proceeds. The associates won almost all of the top prizes between 1995 and 2000, including McDonald's giveaways that did not have the Monopoly theme. The associates netted over $24 million. While the fraud appeared to have been perpetrated by only one key employee of the promotion company and not by the company's management, eight people were originally arrested, leading to a total of 21 indicted individuals. The relationship between McDonald's and Simon Marketing broke down in a pair of lawsuits over breach of contract, eventually settled out of court, with McDonald's' claim being thrown out and Simon receiving $16.6 million. Due to a procedural technicality, four of those convicted of the fraud were later released as they were not initially charged with the offense.

In 1995, St. Jude Children's Hospital in Memphis, Tennessee received an anonymous letter postmarked Dallas, Texas, containing a $1 million winning game piece. Although game rules prohibited the transfer of prizes, McDonald's waived the rule and is making the $50,000 annual payments. Investigations later indicated that Jacobson had admitted to sending the winning piece to the hospital.

The promotion mimics the game Monopoly. Originally, customers received a set of two tokens with every purchase, but now tokens come only with certain menu items. Tokens correspond to a property space on the Monopoly board (with the exception of the Golden Avenue/Arches Avenue "properties", which were added in the 2008 edition, and the Electric Company and Water Works utilities which were added in the 2014 edition). When combined into color-matched properties, the tokens may be redeemed for money. Historically, the grand prize ($1 million; annuity-only) has been the combination of the two most costly properties, Park Place and Boardwalk, but in a 2006 game the top prize ($5 million, with the traditional $1 million prize for Boardwalk/Park Place) was awarded for collecting the four railroads. There are also "instant win" tokens the recipient can redeem for McDonald's food (typically small menu items, such as a free small McFlurry or medium fries) but never for any food item that has game pieces, money, or other prizes. The 2001 edition was titled Pick Your Prize!, in which winners could choose which of three ways they wanted their prize awarded to them (i.e. they could choose if they wanted their $1 million in cash, gold, or diamonds; etc.). The 2016 edition, called Money Monopoly, has all its prizes in cash, including the $1 million for Park Place and Boardwalk.

Additionally, in the 2005 edition, certain foods always came with one coupon which could be used at either Best Buy, Toys R Us, or Foot Locker (including online stores). The value of each coupon was random, with Toys R Us coupons ranging from $1 to $5; up to $5 in coupons could be used in a single transaction. In 2008, these coupons were redeemed for up to 25% off any Foot Locker item(s). Since 2009, the promotion has not featured any coupons.

Law requires that game pieces be available upon request without any purchase necessary, and can be requested by the mailing of a handwritten, self-addressed stamped envelope.

The rare collectible pieces that dictate the odds of winning are as follows:

Note that the rare piece is alphabetically the last property in each group, except for Boardwalk, which is the last piece on the board.

[*] Until 2007, Mediterranean and Baltic avenues were dark purple properties on the traditional Monopoly board; the color changed to brown in 2008.

The UK version of the rare piece list is as follows:

The German version of the rare piece list is as follows:

In 2004, McDonald's introduced an online counterpart to its traditional game. In addition to the traditional "sticker" game, participants can play online. Each game piece lists a code which can be entered online, to a maximum of 10 entries per 24 hours. Each code entered grants the user one roll on a virtual Monopoly game board, identical to the board game's board. Rolling "doubles" (two dice sharing the same number), as with the real board game, allows the user to move again.

Landing on Electric Company, Income Tax, Jail/Just Visiting, Go to Jail, Water Works, or Luxury Tax does not count towards any prize. If a player lands on an unowned property (not landed upon by the player in a previous turn), the user will "collect" that property. When all properties of a colored set are collected, the user wins a prize, with prize values similar to those of the sticker game. In addition to collecting property sets, users can also win by landing on certain "instant win" spaces, including Go, Chance, Community Chest, and Free Parking. Landing on Go (but not simply passing it) gives the player a code worth one free hour of WiFi access at participating McDonald's restaurants. Landing on Chance is worth money to spend at Foot Locker. Landing on Community Chest allows the user to be given a code worth 25 My Coke Rewards points. Landing on Free Parking is a prize of a $50 refillable gas card from Shell, or alternatively 25 complimentary apple pies.

The values of the dice are not random. As stated in the contest rules, one property in each set is "rare," similar to the sticker game. These rare properties are landed on only when the game server "seeds" a winning roll. Winning rolls are seeded at specific times on specific dates, and the first user to roll the dice once a win has been seeded will land on a winning piece. This allows McDonald's to declare the odds of winning certain prizes, a legal requirement for contests in most jurisdictions.

In 2010, the online game was changed, removing the dice and the game board, presenting only 3 Chance cards from which to pick. One has a prize, starting at 30 My Coke Rewards points, but may be (non-randomly) seeded with a higher-valued prize. Player chooses one card, is asked if that is the choice the player wants to make, and the card is flipped. If it is the pre-selected winning card, player wins the pre-selected prize. Odds of winning: Based on time you enter code not the card you choose.

In 2011, the game was changed again – the mascot, Rich Uncle Pennybags (aka "Mr. Monopoly"), is shown attempting to throw a Chance card into a top hat. If the card lands in the hat, the player can claim a prize. Players must choose a "throwing style", which only changes the animations used – it does nothing to affect one's odds of winning.

In 2012, the game was changed once more. Players must click on "Spin" first, and if it landed on "GO!", the player wins the online prize shown. Similarly as of 2013 players must click on "Play", and if it results in a win, the online prize is shown onscreen; regardless of the outcome, the participant receives an entry to win a 2013 Fiat 500 Cabrio.

While the giveaway is essentially identical in each country where it is available, game pieces collected in one country cannot be used in another country.

For all versions of the online game, players are restricted to a set number of online entries per day.
In the UK, this is restricted to 24 entries. In the USA, Canada, and Puerto Rico, 10.

Note that the official rules state: "The purchase, sale, trading, or barter of Game Pieces, Game Stamps, FREE Codes or Game Codes via Online or live auctions, or any other methods, does not constitute Legitimate Channels and is expressly prohibited." This includes eBay as it is a violation of their lottery policy. 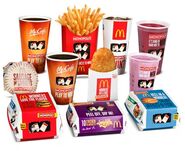 Game pieces and a "peel"