Monopoly: Marvel Universe Edition is a version of the original Monopoly. This game is not to be confused with the Marvel (Universe) Edition. It can be played with 2-6 people, aged 8+.

"Marvel Avengers Edition game is about collecting power instead of money, and using your power to save different locations from evil villains. The traditional Chance and Community Chest cards are now S.H.I.E.L.D. and Villains cards. You collect power from other players when they land on spaces you've already saved and when you pass "Go." When the last location has been saved and all the villains are defeated, the Super Hero with the most power is the winner! Use the included Hero die to team up with your fellow Super Heroes and defeat powerful villains. The colorful, round gameboard, Avengers character tokens, S.H.I.E.L.D. and Villains cards, and Hero die add a different dimension to the classic Monopoly game. Includes: Game board 6 Avengers tokens 6 Avengers Superpower cards 72 location markers (12 for each Super Hero) 16 S.H.I.E.L.D. cards 24 Villains cards 1 Power Pack 2 dice 1 Hero die Game guide." 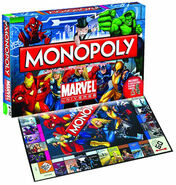