Monopoly: Marvel Comics Edition is a version of the Monopoly game released in 2015. It is for 2-6 players, aged 8 and up.

"The world's most popular board game teams up with the world's coolest superheroes for the ultimate Marvel experience! This special edition celebrates the feats of characters such as Wolverine, Captain America and Spiderman. Collect your favourite characters, invest in houses and hotels and watch the rent come pouring in!" 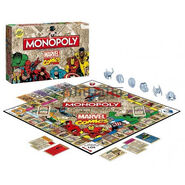