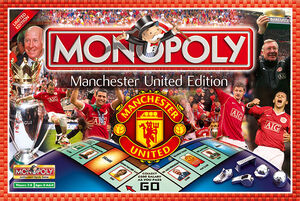 This is an article about Monopoly game based on Manchester United F.C. If you're looking for Manchester Edition click here.

"The classic board game takes on a new shape in this Manchester United edition. Featuring stars from the current squad alongside heroes from United's glorious past and two of football's greatest ever managers. How to play Move around the board, buying and selling property. Build houses and hotels on your property and charge other players rent when they land on your locations. Sit back and accumulate a fortune from your property empire, but watch out, avoid taxes, jail, or going bankrupt. This version of Monopoly requires players to accumulate wealth by acquiring stands and stadiums. Community Chest and Chance cards are replaced by Home and Away cards. It's an absolute must for all Reds fans Official Licensed Product."

In this version, regular property tiles were replaced by the best players from current squad (2009) of Manchester United F.C., so me old legends of this club and with few best coaches.

In this version Railroads were replaced by Stands:

In this version, standard Utilities, like Electric Company and Water Works were replaced by Museum and Megastore.

Corners and other spaces 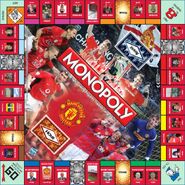 Card of most valuable property "Sir Alex Ferguson"
Add a photo to this gallery
Retrieved from "https://monopoly.fandom.com/wiki/Manchester_United_F.C._Edition?oldid=13641"
Community content is available under CC-BY-SA unless otherwise noted.