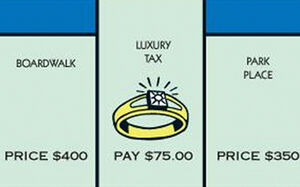 Luxury Tax is a space on the US Monopoly Board nestled between Park Place and Boardwalk. it is one of the two tax-related spaces on a standard board.

A player landing on the space must pay a luxury tax to the Bank. Before the September 2008 graphic redesign of the game, the tax was $75. This was increased to $100 after the redesign.

Some variations of Luxury Tax include: