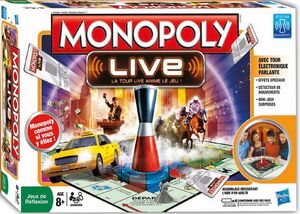 Monopoly: Live Edition is a French-language version of the classic boardgame published by Hasbro in 2011.

The big news in this version is the "electronic revolution " that will mediate and manage the game.

The tower is able to identify different elements of the board and communicate with players in that they hide (or not) with their hand these elements. The tower also serves as bank accounts and assets of each player. It also recognizes the proprieties held by each player.

It is also setting out the cards " luck " and " fund community."

Rules of the Game

In this version, the rule of the game is not even delivered , as is the "tower" that takes care of setting the game. However, the basic rule applies. It is still a bit modified because of unforeseen events may occur , which does not occur in the classic version . For example, the bets on a horse race or the sale (auction) of a property that will not find buyer quickly.

In conclusion, it can be said that this version, although based on the classic game , is halfway between the junior version and the normal version.

It is ideal for children too big for the junior version but still too small for the " good old Monopoly ".

Contents
Add a photo to this gallery

Retrieved from "https://monopoly.fandom.com/wiki/Live_Edition?oldid=17862"
Community content is available under CC-BY-SA unless otherwise noted.