Monopoly Junior is an easier, simplified version of the classic boardgame, aimed at younger players ages 5+. It has a smaller, rectangular board and instead of being based on street names it is based on a funfair (amusement park), to make it more child-friendly.

"Join Rich Uncle Pennybags and his nieces and nephews for a thrill-filled day at the Amusements along the Boardwalk - the Roller Coaster, the Magic Show, the Water Slide, the Video Arcade and more."

"Of course the kids want to get into the act, so they set up Ticket Booths on the Amusements and collect fees from other players who land on them! Set up a Ticket Booth on two Amusements of the same color, and you can collect double the fee! Draw a Chance card and you may take a ride on a Miniature Railroad, win a free Ticket Booth...or pay $3 to visit the Rest Room!"

"With all this money changing hands, sooner or later one of the players runs out - and the player with the most cash on hand wins..."

On their turn, a player rolls the die or spins the spinner (depending on the version) and moves that number of spaces clockwise around the board. The player then acts depending on the space on which they have landed:

An Amusement without a Ticket Booth

The player pays the bank the amount shown on the space and places one of their colored ticket booths on the space. As in the standard game, if the player has enough money to buy, but not the exact amount, the banker (who also plays) can make change. Unlike the standard game, players cannot decline to buy amusements, as there is no auction.

An Amusement with a Ticket Booth

The player must roll the die or spin the spinner again and move the number of spaces shown.

If the player lands here by roll of the die or spin of the spinner, they are "Just Waiting" and they simply move off the space on their next turn.

Go to the Café (Restrooms)

If there is any money on this space when a player lands on it, they get to take the money for themselves.

The player collects $2 every time they land on or pass GO.

The player picks up the top CHANCE card, follows its instructions, then returns it to the bottom of the pile.

The player moves their piece to the space indicated and collects $2 if they pass GO unless otherwise instructed.

When one player runs out of money, the game ends. All other players total their money, and the player with the most money wins.

Differences between Monopoly and Monopoly Junior

In addition to the standard Monopoly Junior, several variations have been released. Among them: 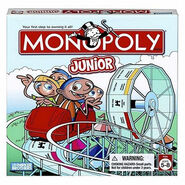 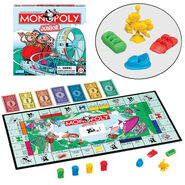 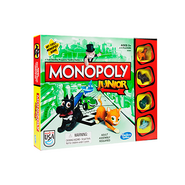