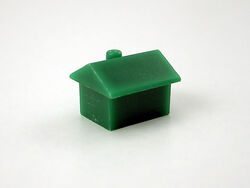 Houses are the little green buildings (that look like houses) that are used in Monopoly.

There are houses and hotels. In the original game, houses were small green buildings and hotels were larger red buildings. In different variations not only the properties and tokens change, but so do the houses. For example, in the Simpsons edition, houses are 'Monorail stops and hotels are monorail stations. In Monopoly: The Mega Edition, there are 2 new building types: Train Depots and Skyscrapers. Monopoly City disregards all of these buildings and adds new ones of its own. Those buildings are the central focus of the game.

The cost for a house differs from each property. These are the prices in the original game for 1 house:

A hotel costs the same as a house but 4 houses are needed to build a hotel.

Houses can only be bought when all of the spaces in the monopoly are owned by the same player. Even build is a rule, that is, you cannot have a hotel on one property and have 2 houses on the others.[1] The only time this can happen is if the 2 properties are not the same monopoly. There is a thirty-two house limit, leading to a common tactic, especially in World Championships and the like, to buy all the houses so your opponents cannot build them. To avoid this, players build hotels on properties houses on properties they own in order to return houses to the pool. However, a common house rule is to have infinite houses.[2]

You must build evenly: you cannot build two houses on a property, for example, until all your properties in the set have a house on them.

For example, it costs £\$2000 to build hotels on both Dark Blue properties (Park Lane\Park Place and Mayfair\Boardwalk) 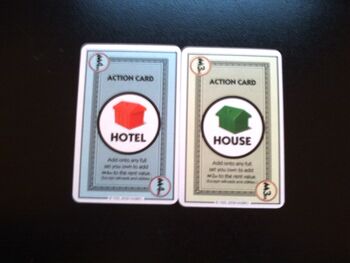 The purpose of houses and hotels is to increase the rent of a property. This is the most evident and easiest way to win Monopoly (be the richest player). The more houses, the higher the rent rises. For example, if someone has built hotels on Mayfair\Boardwalk and you land on it, you must pay that person £\$2000. This normally results in bankruptcy but not all the time.

If you owe someone money and you can not raise it by mortgaging and handing over cash, you can sell your houses and/or hotels. This does result in losing profit as you can sell houses/hotels for only half their original cost.

For example, it costs:

No property can be sold or traded with buildings on it; these must be sold back to The Bank for half of what it cost to erect them.

In Monopoly: The Mega Edition, 2 new buildings were added: Depots and Skyscrapers. There are 4 Depots, each one costing $100. These are built on Railroads. A Depot DOUBLES rent on whichever Railroad it is placed on. Only 1 Depot may be built on a single Railroad. Skyscrapers add to rents on other properties. Once a Hotel is placed on ALL of the properties in a group, Skyscrapers may be built. The builder returns one Hotel per Skyscraper and pays for them. Skyscrapers add $500 to the Hotel rent on the first 2 sides of the board, and $1000 to the Hotel rent on the last 2 sides of the board. This can raise Boardwalk's rent to $3000!

Main Article: Monopoly City Buildings These new buildings are built on districts rather than properties, and each block adds to the rent value. Up to 8 blocks worth of residential and industrial buildings can be built on 1 district. Bonuses, Hazards, and other special buildings do not count against the 8 block limit.