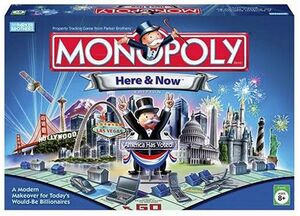 Monopoly Here and Now is a modernized version of the classic Monopoly board game. Released in September 2006, game play remains relatively unchanged, but almost all visual aspects are different.

Properties have been changed to famous locations around the USA, such as Times Square, the White House, Las Vegas, and the Gateway Arch. New tokens include McDonald's fries, a laptop computer, and a Starbucks coffee mug.

A later version, the Electronic Banking Edition, was released as an update to the Here and Now Edition. Its main changes include different tokens (such as a Segway and a baseball cap), and, instead of using bills as in the original, money is stored on one of 6 cards. Money is added and taken electronically. In 2008, the World Edition was released following online voting for its properties.

Retrieved from "https://monopoly.fandom.com/wiki/Here_and_Now_Edition?oldid=18789"
Community content is available under CC-BY-SA unless otherwise noted.