Monopoly Wiki
Register
Don't have an account?
Sign In
Advertisement
in: Monopoly Editions, Board Game Variants, No Title Deed cards,
and 5 more 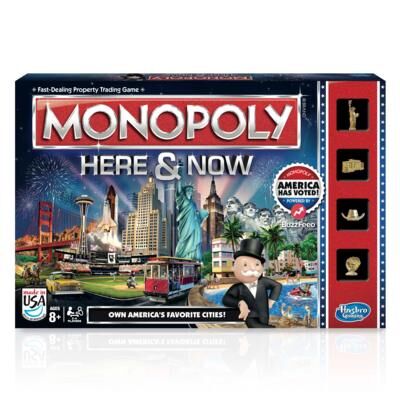 In this fast-paced version of the Monopoly game, players race around the board visiting cities and collecting passport stamps. The first player to fill their passport wins! The gameboard features favorite cities like Seattle, New York, and Denver. The game also includes 4 iconic tokens: the Statue of Liberty, a baseball glove, a trolley, and a cowboy hat. Every time someone adds another stamp to their passport, they get closer to winning!

The Hasbro Gaming and Monopoly names and logos, the distinctive design of the gameboard, the four corner squares, the Mr. Monopoly name and character, as well as each of the distinctive elements of the board and playing pieces are trademarks of Hasbro for its property trading game and game equipment.

First published in 2015, this game is different than traditional Monopoly (even previous "Here & Now" Editions) - there are no houses, hotels, or even title deeds.  The goal isn't to bankrupt other players (in fact, the rules say if you are out of money, just don't pay - but keep playing). The goal of each player is to fill their own "Passport".

This game plays far more like Monopoly Empire than Monopoly.

The properties were voted on by visitors to the Buzzfeed website. They represent different locations throughout the United States. They are as follows

There are at least 2 Editions