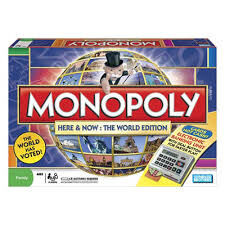 Released in 2008, Monopoly Here & Now: The World Edition is another updated version of Monopoly Here and Now. Unlike other editions, the World Edition features cities from around the world, chosen through online voting. Cities include New York as Indiana Avenue, London as Illinois Avenue, Sydney as Kentucky Avenue,Tokyo as Oriental Avenue, Shanghai as Tennessee Avenue, Barcelona as Vermont Avenue, Istanbul as St. Charles Place, Gydnia (the smallest on the list) as Mediterranean Avenue, and Montreal, Canada as Boardwalk. As with the other Here & Now Editions, values are 10000x what they are in the original game, and with the 2008 release of the original game, the 10% option is removed from Income Tax. The Chance and Community Chest cards are updated to fit the edition, and each set comes with 6 random tokens chosen from 24. The World Edition is also available on Pogo.com, and allows for a small selection of customized rules and timers. Special Pogo tokens, such as the Tiki Bros. and Hog Heaven Slots pig are available. 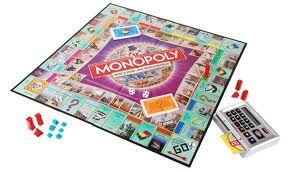 Retrieved from "https://monopoly.fandom.com/wiki/Here_%26_Now:_The_World_Edition?oldid=16775"
Community content is available under CC-BY-SA unless otherwise noted.