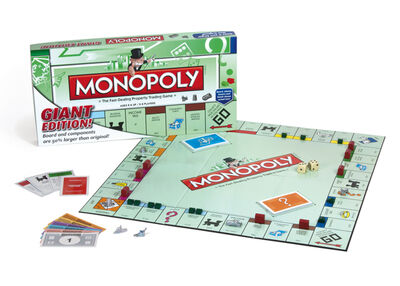 The "Giant Edition" published by Winning Solutions  in 2012 is a version of the standard Monopoly™ Brand game with only one change - everything is 150% the size of the standard version.  This includes the board, the box, the dice, the cards, the tokens, the money...  everything - even the instructions are in large print on an 8-page foldout that is nearly 8.5" x 11" when folded.  To give an idea of the scale, the Monopoly Money is nearly the size of standard US currency, being taller than a $1 bill, but not quite as long.

The "Giant Edition" is played exactly like standard Monopoly.  The Speed Die, introduced in the Mega Edition is also included, using the Standard Edition Speed Die rules , (there are no Bus Tickets).

All tokens are 150% the size of standard Monopoly tokens and are more detailed.

Note:  These are different than the eight in the standard edition, which replace the Cannon and the Iron with the Wheelbarrow and the Cat, respectively.

When opening the board from the box, it unfolds once - revealing two halves, which are each folded twice - meaning there are 3 sections on each side for a total of 6 section.  It also means that there is a cut between the two halves going 2/3 of the way down the board.

Add a photo to this gallery
Retrieved from "https://monopoly.fandom.com/wiki/Giant_Edition?oldid=10472"
Community content is available under CC-BY-SA unless otherwise noted.