First published in 2003, Ghettopoly or Ghettopoly.com is one of the most, maybe even the most, controversial version of monopoly ever, for the usage of racism, sexual behavior and drugs.

The four railroad properties are replaced by liquor stores. Other properties include a massage parlour, a peep show and a pawn shop. The Community Chest and Chance squares become Ghetto Stash and Hustle squares, while taxation squares are replaced by police shakedown and carjacking squares.

Instead of building houses and hotels, property owners can build crack houses and projects. The seven game pieces include: a pimp, a ho, a 40 oz, a machine gun, a marijuana leaf, a crack rock, and a basketball.

The game was criticised as offensively racist by a local chapter of the NAACP and black clergy among others.

The game was pulled from the market by Urban Outfitters, its retailer. Chang still marketed the game without their support. According to Chang's now-defunct website, further such games were planned, including Hoodopoly, Hiphopopoly, and Thugopoly. In October 2003, Hasbro sued David Chang over the game's similarities to Monopoly. In January 2006, Chang was found in contempt of court for failure to produce documents.

The court thus entered a "default judgment" for Hasbro's continued use of "Monopoly" as a trademark, and dismissed Chang's counterclaims, which were to revoke trademark status on "Monopoly". In May, 2006, the court estimated that Chang generated US$8,790,000 in profits from the sale of Ghettopoly, and that damages of $400,000 were reasonable as reflected in the court documents.

According to eBay's Offensive Material Policy, neither Ghettopoly nor "any of its variants" can be sold. 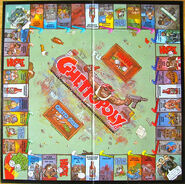