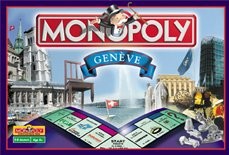 The Monopoly: Genève Edition is a French-language version of the classic boardgame first published in 2001 by Winning Moves Games and featuring the Swiss City of Geneva.

The 2001 Edition uses Swiss Francs (SFf) as currency, but later editions use the more generalized Munny (a capital M with 2 horizontal lines through it) symbol instead.

The 2010 Edition includes a Speed Die.

Contents
Add a photo to this gallery
Retrieved from "https://monopoly.fandom.com/wiki/Gen%C3%A8ve_Edition?oldid=12991"
Community content is available under CC-BY-SA unless otherwise noted.