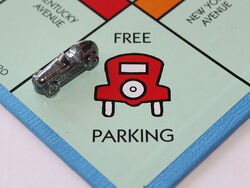 Free Parking is a corner square on the board diagonally opposite to Go. When a player lands here nothing happens and they move off the space on their next turn.

Free Parking, however, is often useful particularly in the game's later stages; when players have bought sets and build houses and hotels and charge exceedingly high rent, Free Parking offers a welcome respite to wait until your next turn.

Many house rules have cropped up over the years regarding this corner square; some of the simplest involve placing a $50 note under the square, which goes to the first player to land there. In some variations, the first note is a $1; when this is claimed it is replaced by a $5 and so on.

It is important to remember that these are all House Rule variants and not official to any known Hasbro version of the game. Hasbro generally discourages players from using this rule, as it can increase the length of the game (i.e. When an almost-bankrupt player lands on the space and gets a hefty bonus) and removes the general benefit of Free Parking.

Here's how it works

Note: This variation generally increases the length of the game.

In the Switch version, the pot starts a $0 and grows as shown above.

In 2009, Hasbro released Monopoly Free Parking: The Toppling Taxi Game; a mini-game that could be played as a stand-alone game or as an addition to a "standard" game board.

By choosing to take the Taxi Challenge (which consists on balancing five plastic Taxi Tokens on a wobbly mini-board) and succeeding, the player's token gets a "free taxi ride" to any space on the Monopoly track, in the same manner as the Speed Die.