Monopoly: Ford Thunderbird 50th Anniversary Edition is a version of the classic boardgame published by USAopoly in 2005.

"Drive down memory lane in 22 of the most classic T-Birds ever built."

"Enjoy this collector’s MONOPOLY game as you compete to own the most popular T-Birds of all-time. Relive 50 years of rich T-Bird history, from 1955 to 2005 as you celebrate the golden anniversary of one of America’s most beloved cars." 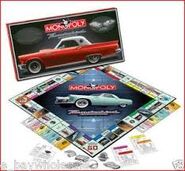 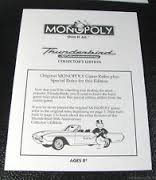 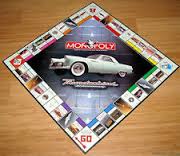 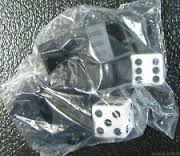 Bank Notes
Add a photo to this gallery
Retrieved from "https://monopoly.fandom.com/wiki/Ford_Thunderbird_50th_Anniversary_Edition?oldid=12788"
Community content is available under CC-BY-SA unless otherwise noted.