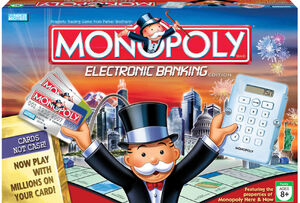 Monopoly: Electronic Banking Edition is an update for Monopoly Here and Now first released in 2006. As with the Here and Now Edition, properties and tokens are changed to reflect modern times.

Changes from Here and Now

Retrieved from "https://monopoly.fandom.com/wiki/Electronic_Banking_Edition?oldid=16369"
Community content is available under CC-BY-SA unless otherwise noted.