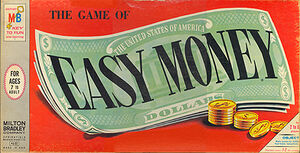 Easy Money is a board game introduced by Milton Bradley Company in 1935. The game is based on The Landlord's Game (as is Monopoly) in the movement of pieces around the board, the use of cards, properties that can be purchased, and houses that can be erected on them.  In 2005, Winning Moves Games released a remake version.

Easy Money is among the Landlord's Game / auction family of games which also includes Monopoly. Players begin with a set amount of money. Properties allow owners to charge rents based on the houses purchased on that property. Players may trade or sell properties. Other spaces have particular action that must be taken when landing on or passing over.

Easy Money has Give-or-Take cards, instead of the two card types in Parker Brothers' Monopoly and early Finance sets.

A game of Easy Money ends when a player is not able to pay what they owe, and had sold or mortgaged all of their properties. The cash-on-hand of each player, plus the value of each property owned (and not mortgaged) was the player's net worth and determined the winner.

Milton Bradley Company (MB) was one of the companies that Charles Darrow showed his Monopoly in 1934, but was turned down. After the success of Monopoly and Finance, Milton Bradley decided to issue its own version of Finance. Despite the Landlord's Game patents having expired and the auction monopoly developing in the public domain, Parker Brothers sued Milton Bradley for patent infringement, and the latter was forced to license the former's patents to continue production of the game. MB was forced by Parker Brothers to make changes for its 1936 "New Improved Edition" issued in three separate versions. A design patent for Easy Money was applied for at the Patent Office and was either withdrawn or rejected.

A new board was made for the 1940s edition with a new box design in the 1950s. A final Milton Bradley edition was printed in 1974. An unrelated game with the same name was issued by Hasbro in 1996. In 2005 under license from Hasbro,[1] Winning Moves republished the 1950s version with new property names.

In 1988, Milton Bradley released a completely different game called "Ea$y Money".  This game was in no way related to the previous "Easy Money" game, and does not play like Monopoly at all.

The game board is piled high with money packs of different denominations. The money packs are ten bills of the same amount wrapped in a paper strip. Players roll dice and move around the board sharing one token. Follow the directions on the space either doubling their current money, landing on or passing an Easy Money space to collect one or two million dollars, collecting a Mystery Jackpot, holding a lottery or playing on Wall Street. All money is taken from the huge pile in the center of the board. The game ends when all the money is taken from the board and the player with the most money wins. 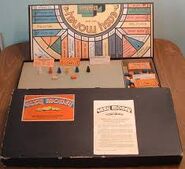 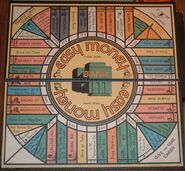 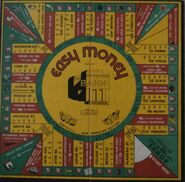 1936 board
Add a photo to this gallery

Retrieved from "https://monopoly.fandom.com/wiki/Easy_Money?oldid=14048"
Community content is available under CC-BY-SA unless otherwise noted.