Monopoly Wiki
Register
Don't have an account?
Sign In
Advertisement
in: Board Game Variants, Late for the Sky Versions, Opoly, 2004 Editions 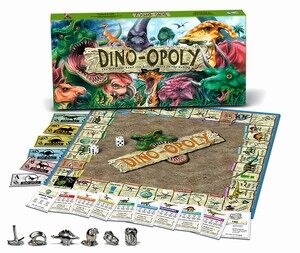 Dino-opoly is a version of the original Monopoly game published in 2004 by Late for the Sky Production Company. In this game players can buy dinosaurs as properties and for buildings use bones and museums.

This version should not be confused with the 2010 Dinosaur Edition published by USAopoly.

"DINO-OPOLY is a game based on those fascinating creatures of times gone by - Dinosaurs. It has all the fun of a traditional property trading game with some prehistoric twists. The game board features everyone’s favorite dinosaurs from giant-sized herbivores to teeny tiny carnivores. Players trade their Fossils in for a Dino Bone to be the big winner in DINO-OPOLY! Each DINO Deed features fun facts about that particular dinosaur."

﻿The properties are, in order:

In Dino-opoly, the stations are replaced by four time periods, in the order of:

﻿The Chance and Community Chest cards are replaced by Explore and Discover. Discover's symbol is a blue exclamation mark, while Explore's symbol is a magnifying glass. All the cards are dinosaur-and-palaeontology themed. They feature new cards that give certain players advantages. For example: