Dice (singular: die) are the main form of movers in Monopoly. They are usually standard, 6-sided (also known as d6 or D6) white dice with black pips. Some editions come with specially colored dice. In recent editions (starting with the Mega Edition), a new die was added: the Speed Die. This speeds up the game and changes the rules a small bit. Normally, two dice are used (noted as 2d6).

The Free Parking mini-game includes an eight-sided die (d8) for placing the taxi tokens; it is white with six different-coloured cars (like the one in the Free Parking space, one Chance face and one Go To Jail face.

In order to make a move, two dice are rolled by the player. The player adds up the total on the top face of each die. The result is the number of spaces they move. If the dice show the same number on each, it is called Doubles. If the player rolls Doubles, he/she rolls again. However, if a player rolls Doubles three times in succession (in one turn), they immediately move to Jail without moving the third time. The only exception on this is if the player threw 2 doubles, then hit a nearest utility space from the "Chance" space that is not mortgaged or unsold, and then the player hits a third pair of doubles, which would normally send them to jail. However since they only did it for the rent calculation and not movement, playing continues unless they hit Doubles a fourth time in a row, thus going to jail.

There are 36 combinations which result in rolls from 2 to 12, in a bell curve distribution. A roll of 7 is most common; rolls of 2 and 12 are the least likely. The odds of rolling doubles on any given roll are 1:6. These odds apply to rolling doubles when moving around the board as well as to any single attempt to successfully roll for release from jail. The odds of successfully rolling for release from jail in three turns are 91:216. The odds of being sent to jail because of 3 consecutive doubles rolls are 1:216.

Some editions and versions have distinctive dice. 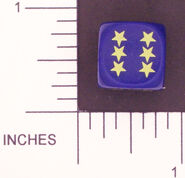 Lord of the Rings Edition die