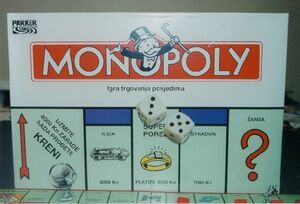 Yugoslavian Monopoly (*Croatia was part of Yugoslavia from 1945-1991) begins in 1970 with release of first Yugoslavian version of the game with places all around the country, cards and other language related stuff translated into Serbo-Croatian language, as currency it used Yugoslav dinar etc. It came in simple cardboard box and it had a square game board, painted green. The most expensive property was Blejsko jezero/Lake Bled (place located in Slovenia).

In year 1985, another version of Yugoslavian Monopoly was released (International Croatian publisher was Biserka - Zagreb), with properties/streets from all around the world; while the game itself was translated in Croatian/Serbo-Croatian language (note: Rules were in three languages: Serbo-Croatian, Slovene and Hungarian language). The version has two names: Croatians wanted to name it Monopoly (with two L-s), showing the difference from original Monopoly and their version. But Serbians wanted to call it Monopoli (with I instead of Y), based on their pronunciation of the word Monopoly, typical for Serbians. Its currency that it used was the Yugoslav dinar. The board was in-style with classic version of Monopoly, having square slots instead of circular ones. Board and banknotes were improved from the latest version.

In 1994 a new Croatian version of Monopoly was released, featuring streets of the Croatian capital city of Zagreb. This is the first version approved from Parker Brothers as well. Currency stayed the same, but board was improved a lot.

Spaces in this version from 'Kreni' on (Properties, stations and utilities only):

In 1994 and 1996 two new improved versions came out with some translation or board improvement or currency changes.

Locations and Board Layout

Croatian version of Monopoly uses streets from the major cities in the country (mostly Zagreb), instead of Streets/Avenues as they are used in original UK and US editions. In the old versions streets from famous European cities were used (Old board).

New, improved board, from the lates version

Other editions, translated into Croatian