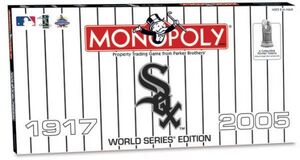 "2005 marks the year the White Sox™ brought a World Series® Championship back to Chicago ending an 88 year drought. The MONOPOLY Brand is proud to present the Chicago White Sox World Series Edition of the world’s most famous board game."

"This collector’s game captures and brings to life the glory of the 2005 World Series Champions, the Chicago White Sox, featuring photos from the 2005 playoffs. Some of the greatest moments in playoff history have been forever preserved like sweeping the defending World Series Champions, Boston Red Sox and Scott Podsednik’s walk-off home run against the Astros. Players such as Paul Konerko, Jon Garland, Mark Buehrle, Jermaine Dye, Tadahito Iguchi and Bobby Jenks make for exciting play in this classic game of risk taking and deal making. The tried and true White Sox fan can now buy, sell and trade the best of the 2005 White Sox, and control the most famed season in White Sox team history." 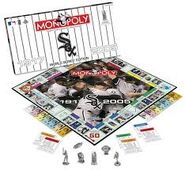 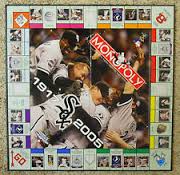 Board
Add a photo to this gallery
Retrieved from "https://monopoly.fandom.com/wiki/Chicago_White_Sox_Edition?oldid=12051"
Community content is available under CC-BY-SA unless otherwise noted.