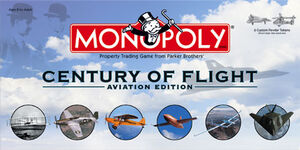 Monopoly: Century of Flight: Aviation Edition is an air flight-inspired version of the classic boardgame published by USAopoly in 2007.

"Fasten your seat belts and prepare for departure! This commemorative MONOPOLY game is rich in history and showcases the greatest aircraft built in the last century. Get rich while buying, selling, and trading the most significant aircraft and aircraft parts of the last 100 years. Put yourself in the pilot’s seat and wheel and deal to “own it all”."

Set
Add a photo to this gallery
Retrieved from "https://monopoly.fandom.com/wiki/Century_of_Flight:_Aviation_Edition?oldid=15169"
Community content is available under CC-BY-SA unless otherwise noted.