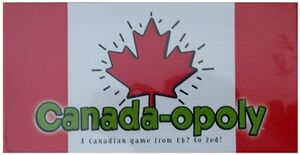 Canada-opoly is a Late for the Sky version of the classic boardgame centered around anything and everything canadian.

Have you ever wanted to own Banff National Park or Meech Lake? Well now you can!

CANADA-OPOLY combines the Canadian enjoyment of board games with the discovery of the coolest country in the world. Canadians can now live out their dreams and buy Canada's most recognized landmarks coast-to-coast, such as the CN Tower, the Calgary Stampede, or Niagara Falls.

Buy your favourite properties, build log cabins to increase the value, and trade them in for ski lodges.

•The city of Winnipeg is located in the centre of Canada when traveling east to west, but Manitoba is still considered to be one of the western provinces.

•Many bays claim to be the "world's largest," but there is no disputing that Hudson Bay is the largest bay contained in one country.

It's a game of strategy and luck to determine who can possess the hockey-loving, maple syrup-drinking, board game-adoring country that is Canada. So grab your metal token and advance to the Face Off. Now is your chance to own Canada‚s provinces, bodies of water, and famous attractions. Just watch out that you don't slide into a snowstorm, or end up paying GST!

CANADA-OPOLY is a game for all Canadians who know that real money doesn't come in just one colour. 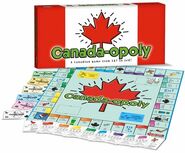 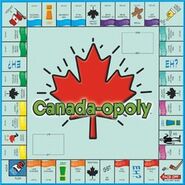 Board
Add a photo to this gallery
Retrieved from "https://monopoly.fandom.com/wiki/Canada-opoly?oldid=13339"
Community content is available under CC-BY-SA unless otherwise noted.