Monopoly: Brave Collector’s Edition is an officially licensed version of the classic Monopoly board game based on the 2012 Disney Pixar computer-animated film Brave.

"The Brave Collector's Edition of Monopoly follows the heroic journey of Merida through the rugged Scottish Highlands. From the private chambers of DunBroch Castle where Merida first defies tradition, to the Wise Woman's cottage, where she is granted her ill-fated wish, join the adventure with King Fergus, Queen Elinor and the mischievous triplets as you buy, sell and trade your way through the kingdom and learn the true meaning of bravery. The game is based off of Pixar 's first fairy tale film, Brave and is released by Walt Disney Pictures." 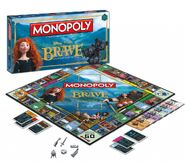 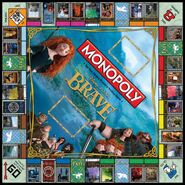 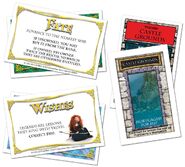 Wishes and Fate take the place of Chance and Community Chest, with appropriate Properties too!