Monopoly Wiki
Register
Don't have an account?
Sign In
Advertisement
in: Board Game Variants, Monopoly Editions, UK Editions,
and 3 more 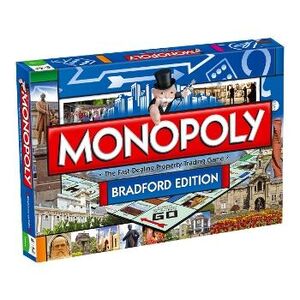 Monopoly: Bradford Edition is a version of the classic boardgame published by Winning Moves Games in 2011 and featuring the City of Bradford, a metropolitan borough of West Yorkshire, in Northern England.

Most iconic Bradford sites given spots on new local version of Monopoly By: Michael Black 19 September 2011

The new Bradford edition of Monopoly will be officially launched next month and will include landmark locations such as Lister Park and the under-construction City Park, the Telegraph & Argus can reveal.

People’s votes have helped to determine which Bradford locations are included on the new board, which will be available on shop shelves from Friday, October 21.

In a sneak preview, the makers have revealed that the very first set on the Bradford board is a set of three made up of some of the city’s most prominent parks.

Much-loved Lister Park and Peel Park both appear on the light blue property set in the more moderately-priced part of the board. And they are joined by the new City Park to make up a park set.

The board is themed largely around sets – heritage, arts, sport, commerce, public parks, entertainment and other categories.

When playing the new game, City Park can be yours – in Monopoly money – for M100. Lister Park can be snapped up for the same price, while Peel Park is a little more at M120.

Of the three, arguably City Park has the best site as it replaces the trendy Angel Islington location from the original London Monopoly board, which the game’s makers say is one of the board’s “more sought after” locations.

Lister Park swaps places with Euston Road, and Peel Park takes over the site normally occupied by Pentonville Road on the London board.

Graham Barnes, Communications Director of the board’s makers Winning Moves UK, said “Many of the sets are in themes, and this one is a park theme. They are in a modestly-priced part of the board because they are public parks, so we wouldn’t want to price them out of anyone’s reach.”

Winning Moves, manufacturers of this version of the Monopoly game under license from Hasbro, announced earlier in the year that there would be a game for the city.

And they said it could not have been produced without the Bradford public.

The public was invited to make suggestions for inclusion on the board. These suggestions and nominations largely shaped the final board.

Mr Barnes said: “We would like to formally thank the great and greater Bradford and district public for all its wonderful input.

“Without these suggestions and nominations, this board could not have been produced.”

He said ex-pats in countries such as Australia and the US could well be playing the game over the festive season. “We have had inquiries and suggestions from many parts of the world,” he added.

He said the full line-up of the board would be revealed on the launch day.

The board will be on sale at: amazon.co.uk, Debenhams, HMV, PLAY.com, Shop Direct, Tesco, The Works, Toys R Us, Waterstones and WH Smith. 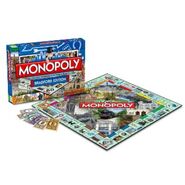