Bibleopoly, first published by Late for the Sky in 1991, is a version of the classic boardgame released in at least three distinct editions, each with different artwork but identical content.

A somewhat simplified Christian-themed Monopoly game where instead of bankrupting the other players, the object is to build a church. This results in faster play in which players aren't eliminated before the game ends. Imagine playing Monopoly with the only goal of being the first to have a property with a hotel, and you get the basic idea. 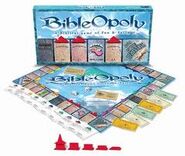 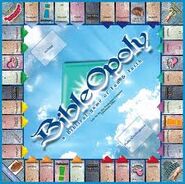 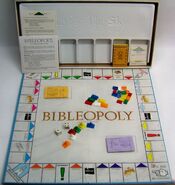 Contents
Add a photo to this gallery
Retrieved from "https://monopoly.fandom.com/wiki/Bibleopoly?oldid=13328"
Community content is available under CC-BY-SA unless otherwise noted.