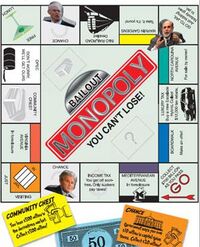 Bailout Monopoly is simply the original Monopoly game with modified rules.[1] The game can end the usually way with one player defeating all other players or the bank can win by calling the all players loans, or "bailouts," immediately. If the a player cannot repay his or her bailout when called, they must forfeit all of their properties to the bank. Therefore it is possible for the bank to own everything at the end of a game.

The regular rules of monopoly apply with the exception of the following twists:

Any money paid for houses or hotels is set aside out of play and does not go to the bank.

Retrieved from "https://monopoly.fandom.com/wiki/Bailout_Monopoly?oldid=16900"
Community content is available under CC-BY-SA unless otherwise noted.