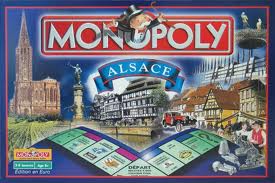 Monopoly: Alsace Edition is a French-language version of the classic boardgame featuring the French region of Alsace. It was published by Winning Moves in 2002.

"Alsace is the heir of a rich history that has always given it an international outlook throughout 10 imperial cities, the Thirty Years War, the Industrial Revolution, and various other influences; history is revealed in the towns and villages, from the streets with medieval half-timbered houses and window boxes, to the churches and fountains in the squares."

"Naturally, tourism has become one of the major strengths of the region: cathedrals, castles, museums of all kinds, houses on river banks, traditional and rich vineyards lie within 170 km in the relative countryside. Gastronomy delights both the traveler and the Alsatians. As a Central European region, it is home to the European Parliament in Strasbourg."

Retrieved from "https://monopoly.fandom.com/wiki/Alsace_Edition?oldid=14427"
Community content is available under CC-BY-SA unless otherwise noted.